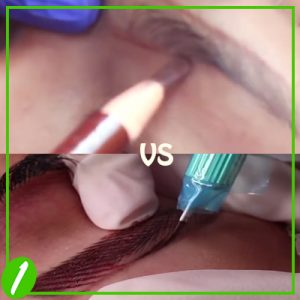 We are going to discuss about Microshading vs Microblading in this article toy give you clear idea on difference between them.

What is microblading? Microblading is a semi permanent technique to deposit pigment into the skin with the help of super fine pen ( a bundle of 12-15 sharp needles) . The tips are so fine and sharp that it can create hair strokes looking as real hair.

The needle reach into the second layer of skin which makes the method as semi permanent. Compare to other techniques microblading gives avery natural look and simulate hair.

How long microblading last? You need to have a touch up in about a month – only then microblading may last for 1-3 years depending on your life style. Stay out of the sun. Since it can fade the pigment and avoid applying exfoliations.

What is shading? Depicting levels of darkness is the shading and therefore when you draw darker shade in darker areas and lighter shade in lighter areas you get shading.

What is microshading? If you consider microblading as a painting then the microshading will be impressioning. Microshading technique creates a soft powder effect done by an eyebrow pencil or powder.

The microshading procedure is applied with the help of an electric hand tool or a manual tool which creates a soft and powder effect which is similar to powder eyebrow.

It noted that microshading utilizes stippling method that uses repetitive dots of pigment. Thus we can show the difference microshading vs microblading.

It is the powder to microblading pencil strokes-just semi permanent. The over all effect more closely similar to sort of brows. The microshading and microblading is almost similar with microblading offering hair stroke like real hair but in case of microshading the brow will have fuller effect.

Microshading is done by an electric hand tool and a round needle. Another advantage is that it last better than microblading.The average lasting year of eyebrow shading is about 2 years.

How long microshading last? There is no difference in life span in buth the cases. If you take a touch up after 6 weeks in microblading and microshading You get the similar results. So in case microshading exculing first touch up you need not to see your artist at least one year before.

Eye brows are in high demand in recent days. In order to obtain the perfect eyebrows there are variety of treatment available. There are so many options that you may be confused to select the correct and best treatment that suits you.

At present you will find a lot articles relating microblading and microshading. Microshaded technique is ready to give you micro bladed brows a perfect semi permanent makeup without any morning hassle. According to other semi permanent tattoo it will lighten over time.

If however you are unsatisfied with color and shade you can change your decision.. Still it looks natural and realistic. Microshading also called shading, embroidery or stippling.

Eyebrow microblading is also called as micro stroking, micropigmentation, eyebrow embroidery, eyebrow feathering and 3D eyebrows. No matter the name at which we call it is new and popular in Asia and Europe for 25 years. Now it is getting its popularity in America also. It allows techniques changing to improve from the day of origin.

Microblading is not like a regula tattoo but it is tattoo type artistry where the pigment is implanted into the deeper skin with a manual tool instead of a machine. This process pigmentation is called micropigmentation. If you apply proper technique microblade eyebrow results look beautiful and natural.

Why only microblading at first?

Microblading is the process of making fine cuts on brows similar to hair strokes and these hairs provide a good base for future microshading. These are the brows obtained from microblading that are realistic you cannot imagine.

It is found that microblading pigment selection is one of the most tricky jobs. When you cosult with an expert technician first time regarding browing he will suggest you take microblading first as a base layer for microshading. This second procedure would be better.

It has already been mentioned that microblading creates hair like strokes from pigment. Microshading however gives broader coverage and is essentially semi permanent brow powder.

The ink or pigment iss same for both the procedures but microblading is done with a number sharp needles meeting at a point and making a tiny blade called “microblading pen”. This is almost like a mini tattoo gun. You can also find microblading pen reviews from internet.

The gun ensures that the ink is applied consistently and applied evenly to the brows. Most of the people who have got sensitive and oily skin prefer microshading than microblading.

It is accepted by all that microshading eyebrow can create defined hair stroke like midcroblading but it is more filled up brows in looking.

Which one you should get?

Finally you study all about microshading vs microblading and take your decision. If however you go through this article carefully you can get correct way to reach your goal. Actually you cannot say in advance which procedure is the best for yourself unless you discuss with an expert.