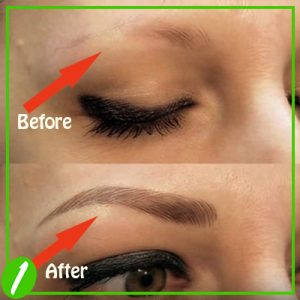 After the end of microblading session the entire healing process will take 4-6 weeks time depending on your age and body regeneration. Your eyebrows will take several phases of change during healing period.

In order to obtain best quality eyebrow you must choose the best permanent makeup ink or pigment. During recovery period as the new skin regenerates the brows will e looking a bit lighter than original.

This might give you the impression that brows are fading quickly but the case is not like this. Often when proper care is taken the client may loose its hair strokes looking uneven. It is absolutely to be normal. This is the only reason why the clients need touch up after 6 weeks.

Once the healing of skin starts it will look like dry skin or dandruff flakes. Thus the dry skin is removed from your eyebrows. The final look you will find at least after 30 days of procedure. Never rub the treated area because it will disturb natural healing process.

After completed healing process apply a layer of sunscreen SPF30 upto SPF50 on your eyebrows when exposed to sun. Sun exposure may cause fading of pigment color very quickly. Avoid applying foundation cream in the eyebrow area.

Just after the microblading procedure is finished to minimize scabbing use a clean cotton-ball with distilled water again and again during the rest of the day. Then aftercare starts according to the following way.

Wash the microbladed area with aftercare ointment twice per day.

The microblading ointment no longer required but you should wash the treated area twice a day morning and night with lukewarm water and dry it completely. Though it is sometime critical to avoid the following you should be careful to avoid.

Resume your normal activities but avoid takin laser and chemical peels or any form of exfoliation , also creams containing retinol or glycolic acid should be avoided.

Healed microblading result is most natural and beautiful looking but the path for obtaining such result is more complicated. When you understand the whole healing process then you can consider a vital point that about Your mental stress and worries during the healing period.

The healing process takes over a month and here are some are some point to follow in order to have the best eyebrow shape and color. During the first 7-10 days after procedure no soap, dust, lotion or water is allowed to touch the eyebrow area.

Although sweating is unavoidable it is advised to sweat less amount. The list of other things that are to avoided in order to have complete healing result:

Is touch up needed after microblading?

Whether touchup is needed for complete healing process and perfect eyebrow we are going to discuss. It is noted that touch up is the second phase treatment of microblading. This is usually happens during 30-60 days after the microblading process.

And the job is taken in the area of eyebrow. During this process the too thick and too dark eyebrow fade away by 30-50%. Which can be somehow regained by touchup? The touch uptakes at least 40 minutes.

The importance of touch up:

It is very important to note that without touchup microblading procedure is considered as half done. Without this you cannot expect the maximum result of the procedure. Without touch up the fading of eyebrow color will be increasing and the total microblading will be disaster.

Another occasional touch up session is recommended but not required during every 6-8 month depending on clients quality to maintain color, freshness and shape of eyebrow. Clients with oily skin need to visit salon frequently and sometime consult the technician.

The cost of touch up varies from salon to salon and depending on the payment schedule chosen by client. Some of the microblading salon will charge free after the initial procedure but small payment for occasional touch up.